Everyone’s favorite plumber and hedgehog are once again going for the gold, as the Mario & Sonic at the Olympic Games series has come to the Nintendo Switch for its sixth installment.  Sure, it may seem like nothing more than a simple cash-grab, but there are some enjoyable new features to be delved into.  So without further ado, let’s light the torch and get into the review itself.

We haven’t seen a story mode in this series since the 3DS version of the London 2012 installment, but it returns in this edition.  After an opening confrontation, the competitors are inadvertently sent back in time to the Tokyo 1964 games (The setting of which is presented in 2D), and getting back to the present is going to be way easier said than done.  In the meantime, our heroes and villains must venture around the retro venues and compete in old-school 2D events, and there are also 10 special minigames that you must unlock in this mode before you can play them elsewhere.

Tokyo 2020 has a big list of events to play, and there are some new ones like skateboarding, surfing, sport climbing, and karate.  Whether you’re playing the 2020, 1964, or Dream Events, each minigame comes equipped with tight control schemes, and you can choose between motion controls and standard gamepad controls.  While the controls are fluid and responsive, you still might want to read the instructions for each event in case they seem a little complex at first.

For the first time in the series, online multiplayer is included.  However, I feel that it is, at the very least, half-baked.  The tournament format in events like table tennis and badminton is ditched (Thus making them feel way too short in length), and you are unable to play the 1964 events.  These aren’t dealbreakers, but they make me believe that the online in Tokyo 2020 just isn’t for me.  If inviting three friends over (And possibly ordering a bunch of Pepsi and Domino’s Pizza) is what I need to do in order to get the multiplayer experience I truly want from this game, so be it. But hey, maybe the developers will improve the online multiplayer in a future patch. 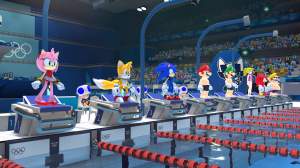 It may knock a few hurdles to the ground, but this is a decent comeback for the Mario & Sonic series and a fine debut for it on the Switch.  If you can stomach the fact that this isn’t supposed to be in the same league as minigame compilations like the Mario Party series, this Tokyo 2020 installment is a great place for you to go on the hunt for gold medals.