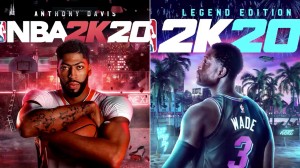 There have been many competitors when it comes to basketball games, and NBA 2K has been on the top of the mountain since its opening tip-off in 1999.  For many years, it faced its toughest competition in EA’s NBA Live series, but the latter began throwing up very bad bricks as the eighth generation of consoles started.  The 2K series has been heavily lauded for its spectacular graphics, tight controls, and incredible depth, and this year’s iteration once again delivers all of the above in spades.  With that being said, let’s hit the paint and discuss all the three-pointers that NBA 2K20 effortlessly drains.

The most notable change in this year’s game is the overhauled MyCareer mode.  You still have the usual prelude games and exercises, as well as off-court interactions with NPC’s, but the storyline of your career is more cinematic and emotional than ever before.  It feels like 2K took notes from the story modes of FIFA and Madden NFL, and that’s not a bad thing.  The cutscenes look beautiful and the voice-acting drains its layups.  Did I mention the story was written by a team that includes LeBron James?

Other than a career mode with a new structure, the list of modes is business as usual.  You’ve got obligatory modes like exhibition games, MyTeam, MyGM, MyLeague, Blacktop, and online play.  Also, you can now play through a full WNBA season if you’re up for shooting hoops with the ladies.  The Neighborhood has new additions like a day/night cycle, seasonal changes, and even a disc golf course.  The sheer level of depth that NBA 2K is known for once again delivers.

The graphical improvement is very subtle, but the visuals are still as crisp and beautiful as ever.  2K20 also has stellar audio, with the usual butt-ton of above-average commentary lines and a decent soundtrack that blares everything from Ariana Grande to Motley Crue.

I like the way they dribble up and down the court

Ever since ’99, it’s clear that the folks at Take-Two Interactive love basketball, and they’ve once again proven just how serious that love is.  Even if basketball isn’t your favorite sport, NBA 2K20 belongs on your shelf if you need a sports game that constantly delivers backboard-shattering dunks worthy of the highlight reel.