For the kids, August means it’s time to go back to school.  But for fans of sports games, August means it’s time for another game of virtual pigskin.  The 30th iteration of EA Sports’ iconic Madden NFL franchise has stepped onto the gridiron, bringing with it some obligatory tweaks and things that might remind you of features from older titles.  So without further ado, let’s take the field and discuss where Madden ’20 completes its passes and where it loses a few yards. 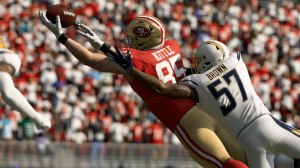 This year, the folks at EA heavily hyped up how much more important each of the teams’ star players are in terms of their stats and statistics, meaning that the difference between them and lesser-known players is bigger than ever.  That might sound like a weird thing to advertise regarding sports games, but it’s not something to sneeze at.  On the field, the controls for things like catching and blocking are tighter than they were last year.  As for game modes, one has been added/brought back and one has been sacked.  The “Longshot” mode has been replaced by “Face of the Franchise: QB1.” After the College Football Playoff, you enter the NFL Draft and it’s on from there.  This mode is basically supposed to bring back memories of the “Superstar” mode that has been absent since Madden 25.  Also, this mode includes ten officially-licensed NCAA teams, which might be foreshadowing a future return of the NCAA Football series (I ain’t gonna bank on that, though).  Unfortunately, existing modes like Franchise and Ultimate Team haven’t had any highly-noticeable upgrades, but at least they’re not broken or unrefined.

The Colts of personality

Not much has changed within the graphics engine, but the animations and physics look a lot smoother than they did last year.  What stood out to more than the graphics was the much-improved chatter from all the players on the field.  Another change with the audio is that the soundtrack only contains songs specifically composed for the game by a variety of well-known artists.  It’s mainly full of rap, which isn’t my favorite genre, but you’ll be satisfied if that’s your cup of tea. 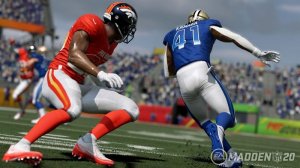 Don’t get mad, get Madden

It may hit the uprights here and there, but Madden ’20 is still a fun game of football that manages to complete the passes that matter.  Whether you’re an adamant sports gamer or a member of a family of football diehards, this year’s installment is another well-produced dose of gridiron goodness for both newbies and veterans of what is probably the most influential franchise in all of sports games.