After leaking the release date on twitter, developer Gearbox has now gone back to the social media platform to confirm the release date for Borderlands 3. Alongside the tweet, Gearbox and 2K released a new trailer for the upcoming game.

The tweet confirming the release date came only one week after Borderlands 3 was announced at Pax East. The tweet read, “Boarderlands 3 arrives on Xbox One, PS4, and PC on September 13, 2019.” The tweet continues by announcing a gameplay reveal event that will occur on May 1st. 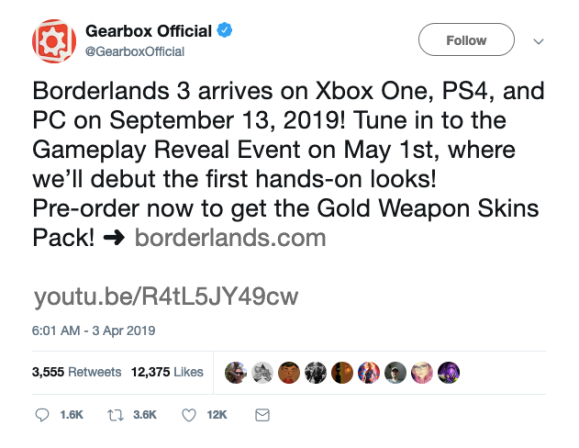 For fans wanting to play this game on PC there is a catch. Like the Division 2 and Metro Exodus, Borderlands PC version will be exclusive to The Epic Games Store. For the first six months, starting on September 13, Borderlands fans will not be able to purchase the game on other platforms, like Steam. This decision could be because of the 12 percent revenue cut Epic takes from the purchase of games on their site, oppose to the 30 percent of Steam.

If you are looking to play Borderlands on the Xbox One, PS4, or PC, but can’t wait until September, Borderlands: Game of the Year Edition is available now.