I’m sure most of us have claimed that certain games are depressingly bad…Filled with flaws and bugs to the point that our first instinct is to go through the stages of grief. But have you ever played a game that had a storyline so sad and tragic that you simply called it “depressing?” I’ve managed to avoid dishing out that label for a long time, but I’ve met my match now that I’ve journeyed through a QTE-filled game called Heavy Rain. 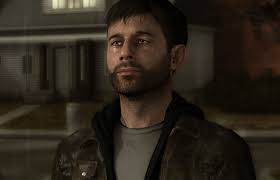 Released in 2010 for the PlayStation 3 and ported to the PS4 six years later, Heavy Rain is a psychological-thriller game developed by French development studio QuanticDream, who are also known today for games like Beyond: Two Souls and Detroit: Become Human. On paper, this game may seem like a rip-off of Silent Hill with a truckload of quick-time events and SixAxis controls…But as we all know, the devil’s in the details. Rather than providing you with an inventory of weapons to use in combat or hideous monsters to beat down, Heavy Rain has a very simplified structure; It’s all about navigating around your environment, retrieving important items, and solving puzzles…Not to mention testing your reflexes and coordination, thanks to the aforementioned QTE’s and motion controls. Every choice you make and the speed of your reflexes determine how the game’s plot unfolds, allowing you to venture through the entire thing without having to deal with game-over screens. In an attempt to feel unique, the game also hands you the ability to hold down the left trigger to listen to a variety of thoughts inside your character’s brain.

I mentioned before that Heavy Rain has a really emotional storyline, so now’s the time I give a brief synopsis about it — Mild-mannered father Ethan Mars is living a generally happy life with his wife Grace and two sons Jason and Shaun; A day after Jason’s 10th birthday, the family goes to the local mall. All seems to be going well until Ethan loses sight of Jason after buying him a red balloon. After the young boy runs across the street to rendezvous with his dad, the two are hit by a car, causing Jason to lose his life and Ethan to fall into a six-month coma. Over two years later, a number of children go missing, including the young Shaun; Soon after that, the local news starts a series of reports about a criminal called the “Origami Killer.” This sequence of tragic events leads to a number of characters (Ethan included) investigating the disappearances, completing a number of trials, and taking on the task of foiling the killer for good. It’s a relentlessly dark synopsis, but such darkness is a prerequisite for the category that Heavy Rain falls into. 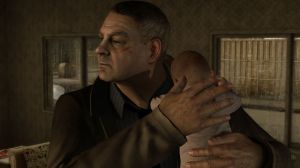 The aesthetics get the job done with a dark-and-dreary graphical style, a highly emotional musical score, and satisfactory voice acting; Without these aforementioned positives, Heavy Rain wouldn’t be as engaging and enthralling as I and others deem it to be. You might be frustrated with the controls at least once, but the thrilling plot and well-produced aesthetics will encourage you to keep going until you finally solve the mystery, which will take somewhere around 10 hours. 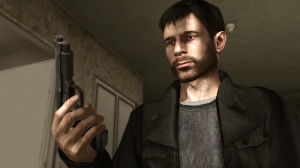 Whether you can go through the story without leaking a single tear or can’t go through a single chapter without reaching for at least one tissue, you’ll most likely still be pleased with the clever mechanics this game brings to the table. Even if you very rarely delve into the psychological-thriller genre, Heavy Rain is an underrated PS4 gem that is well-deserving of the lauding that many critics have been thrown at it. There’s no time for singing in this rain…We have a killer to stop.