Two days ago, Borderlands developer Gearbox Software tweeted an image that has lead many to believe that Borderlands 3 will be announced at PAX East 2019. According to polygon.com, the image posted by Gearbox Software’s official Twitter account features “a freeway exit sign with a date, March 28, and a location: Boston, MA.”

Since the exit sign is accompanied by the number 3, everyone believes this means Borderlands 3 will be announced at PAX East 2019. You can gaze into Gearbox Software’s teaser image yourself, by clicking here.

Polygon.com reports that Gearbox Software’s having a PAX theater presentation “on Thursday, March 28, at 2 p.m. ET, where it promises ‘never-before-seen reveals, exclusives, and surprises.’” The website also shared some interesting details about the event–concerning Gearbox Software’s wishes and goals for this year’s presentation.

“This is your opportunity to get a behind-the-scenes look at Gearbox Software and Gearbox Publishing, along with the latest news and updates from the makers of Borderlands, Battleborn, Brothers in Arms, and more! We will have never-before-seen reveals, exclusives, and surprises, so don’t miss out!”

According to polygon.com, Gearbox Software’s president, Randy Pitchford, stated at PAX East 2019, that the studio wanted to recruit “new talent to help it create ‘the next Borderlands.'” They even cite him, at last year’s PAX West convention, stating, Gearbox Software’s “working on the thing I think most of you guys want us to be working on.'”

Based on Gearbox Software’s track-record with Borderlands, Borderlands 2 was released six years ago for the “PlayStation 3, Windows PC, and Xbox 360.” Polygon.com claims that ever since Borderlands 2 hit store shelves, the developers, its publisher, “and its partners have released a number of add-ons and spinoffs.”

Tickets to this year’s PAX East event should still be available as I report on this news. So, if you want to witness the Borderlands 3 announcement (if it’s actually getting announced), in-person, I’d buy those tickets now.

Besides the excitement surrounding Borderlands 3’s possible announcement at PAX East 2019, earlier today, Nintendoeverything.com reported that Borderlands 2 might be ported over to the Nintendo Switch soon.

Apparently, the official Gearbox Software Twitter account tweeted out another image that appears pix-elated. According to Nintendoeverything.com, Borderlands fans analyzed the image and figured out that it was a screenshot of the previous Borderlands title, Borderlands 2.

Here’s the mysterious image the official Gearbox Software Twitter account tweeted out alongside the non-pix-elated image posted in Nintendoeverything.com’s article. 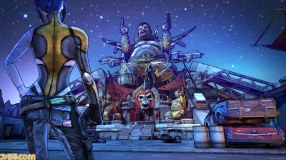 Since this old gem is currently available on older and newer generation hardware, meaning, PlayStation 4 and Xbox One owners can purchase the title now, this has led many to speculate that this image is hinting at a Borderlands 2 for Nintendo Switch announcement.

As written in Nintendoeverything.com’s article, I too, believe that if this is the case, it would be a great announcement for Nintendo fans–since the series “has never made it to an Nintendo console.” Though an announcement for Borderlands 3 or Borderlands 2 from Gearbox Software at PAX East 2019 remains a mystery, we do know that their “PAX East 2019 panel [will take place] on March 28 at 2 PM ET / 5 PM PT.”

So, if we want to know the truth, we’ll get it on that day or earlier–if leakers get crafty on Twitter or elsewhere. In any case, we’ll be sure to update you all when Gearbox Software’s PAX East 2019 panel concludes.

What do you think about this news? Do you believe we’ll see Borderlands 3 at PAX East 2019? Is there a chance the Borderlands series will make its way to the Nintendo Switch? Let us know on Facebook and Twitter, and follow us for more Borderlands news, and everything gaming too.