If you were to spend half of your time fixing leaky pipes and the other half stomping on giant spiked turtles, you would most likely develop a serious craving for a vacation.  Thankfully, you wouldn’t have a chance of living like that unless you’re from the Mushroom Kingdom.  If anybody in the gaming universe has earned a long-overdue R&R, it’s everyone’s favorite red-clad plumber — the one and only Mario.  Although this 2002 GameCube platformer has had a very polarizing place in Nintendo’s flagship franchise, Super Mario Sunshine is a spectacular game that sharpens every element of the Mario adventures before it.

In this seventh release in the Super Mario series, Mario, Peach and the Toads head to a tropical island paradise known as Isle Delfino for a sun-drenched vacation, but they arrive to find out that a mysterious figure pretending to be the famous plumber has covered the island in graffiti-like goop.  So instead of catching rays and eating scrumptious seafood like he and his gang originally planned to do, Mario is given the task of cleaning up the entire island by any means necessary.  Luckily, he stumbles upon a special creation to help him clear his name — A backpack-like water-shooter named FLUDD.

So with that brief summary of the plot out of the way, let’s get into the gameplay itself.  Running, climbing, swimming, and crazy acrobatics return from Super Mario 64; However, Mario also has new moves up his sleeve, like jumping from one wall to another, diving and sliding across the floor, and leaping into the air while spinning at dizzying speeds.  FLUDD grants you the abilities to spray water at enemies, hover in the air, take off like a rocket ship, and run at super speeds.  The objectives in the game’s many missions are similar to those in the famous 1996 N64 classic, except instead of collecting Power Stars, every mission you complete grants you a Shine Sprite, which gives Isle Delfino their beloved sunshine. Whether you’re searching for red coins, rescuing villagers, or dealing with troublemakers, each mission not only tests your platforming ability, but also requires you to figure out how to use FLUDD correctly.  Those who need help with their jumps will be pleased to know that Yoshi also makes a return, and he now has the ability to shoot juice from his mouth provided you feed him fruit. 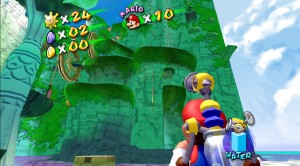 With pasta or pizza

Considering this is a Mario game, I honestly can’t find anything wrong with it, although certain missions and the overall length of the adventure may alienate casual players.  Whether you’re a longtime fan of the Mario franchise or you just love tropical locations, Super Mario Sunshine is a must-have for those who collect GameCube games.  Just try not to get all the back pain Mario has gotten; Wearing a device like FLUDD has to take a toll on your ribcage for sure.