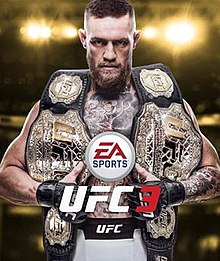 Like the NFL, the NFLPA, and FIFA, the Ultimate Fighting Championship only allows one company at a time to develop videogames with their licensing; And ever since THQ sold their ownership of said license as if they were preparing for their upcoming filing of bankruptcy, the world heavyweight champion of sports games in Electronic Arts has been sharpening what they started with 2010’s EA Sports MMA, releasing three games with the UFC branding on top of that.  EA’s first two UFC games may have lost by split-decision due to flaws with the replay value and the combat; But with years of  tweaks to the controls, animations, career mode, and overall depth of the package, EA Sports UFC 3 is a terrific combat-sports game that’s worthy of a title shot. 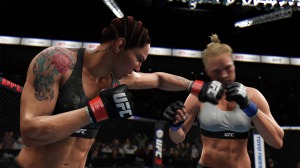 Kick! Punch! It’s all in the mind!

If you’re a fan of combat sports and/or fighting games but don’t really know what mixed martial arts (MMA) is, it’s a sport in which the combatants utilize fighting styles that they train in; Wrestling, kickboxing, judo, etc. UFC is the NFL of this sport, so it makes sense to have videogames with its logo on the boxes.  And what does UFC have in common with EA? They have a knack for buying out smaller companies.  But enough about business and money, let’s talk about the game itself. 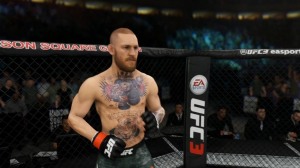 UFC 3 isn’t a pick-up-and-play fighter like Super Smash Bros., but it’s not as complex as Street Fighter (Unless you consider stamina meters to be complex).  The face buttons are for strikes, the triggers are for blocking (The left is also used for body strikes), the bumpers are for signature and technical strikes, the right stick is used for moving your head, and there are takedowns and strike combos too numerous to name.  When clinching or fighting on the ground, the right stick lets you change your position.  And while on the ground, you can press the right bumper and move said stick to initiate a submission, which is once again contested with a love-it-or-hate-it stick-moving minigame.  It may seem like this fighting system has too much to learn, but experienced combatants will get used to it in a short time.  Not only does the game control very well, but the graphics and animations are very realistic-looking thanks to EA’s Real Player Motion Tech.

A dojo of depth

Being a sports game, UFC 3 comes with a career mode, and it’s a huge improvement over the career mode in the game’s predecessor.  Instead of participating in The Ultimate Fighter, your MMA journey starts off in the World Fighting Alliance, where you compete in several fights in an attempt to be offered a UFC contract.  However, this mode isn’t just a bunch of fights one after another; You schedule fights, select where to train, choose what your training exercises are, do favors for your gym, and you can even interact with fans and competitors in person and on social media.  The goal between each fight is not only to upgrade your skills and attract the attention of fans, but also to make sure you don’t work too hard or too little before you step into the Octagon.  The folks at EA have provided a hefty set of tools that really make you feel like you’re living the life of a professional mixed martial artist.

As for where the fights in the game take place, UFC 3 features a handful of licensed arenas from all over the world, from the Saitama Super Arena to Madison Square Garden.  But much larger than the number of arenas is the number of fighters.  Over 200 fighters make up the game’s roster, including big names like Conor McGregor, Ronda Rousey, Jon Jones, Daniel Cormier, and CM Punk.  There’s also a very tight create-a-fighter mode, where you customize everything about your fighter from the moveset to the entrance music.

If you’ve got some fellow MMA fans in the room (And possibly some Digiorno pizza and Pepsi Cola), you’ll be very satisfied with the game’s multiplayer options.  Aside from standard fights, UFC 3 also has match types called Knockout Mode, Stand & Bang, and Submission Shootout.  You can even set up your own match cards and tournaments that can be played both solo and with additional players.

Not only does the game feel and look like UFC, but it certainly sounds like it too.  Jon Anik and Joe Rogan are at the microphone to provide reasonably good commentary, although you can listen to Snoop Dogg during Knockout Mode matches if you wish.  And of course, there are many voice lines to hear from the Octagon announcer Bruce Buffer and even the UFC referees that agreed to be in the game.  The music gets the job done as well, with the soundtrack featuring EA-composed songs, stock music, and a handful of record-label tracks ranging from A$AP Ferg to the Killers. 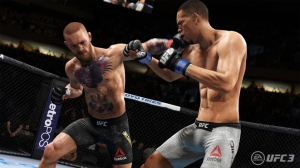 Being an EA Sports game, UFC 3 once again features an Ultimate Team mode as its primary online mode, where you create fighters and build up their skills by taking on your fellow players.  The  microtransactions will no doubt be a turn-off to certain gamers, but the mode itself is not broken by any means and can be well worth the money if you know what you’re doing and what to expect.  You can also invite an online friend into a private lobby and compete in a mini-series of fights, just like other EA Sports titles. 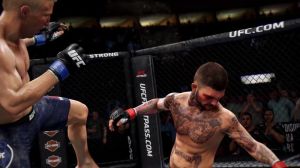 Into the main event

It’s not perfect, but this is another solid MMA game and a must-have for big fans of the sport.  It will even appeal to fans of fighting games in general thanks to the arcade-like multiplayer minigames that are featured.  If you want a reasonably realistic experience as to what being an MMA fighter is all about, you cannot go wrong with the deep and tight fighter that is EA Sports UFC 3.  The Octagon is calling your name.