Toby Fox’s games are created with the purpose of being played ‘blind’ the first time through. ‘Deltarune: Chapter 1’ should be played after Undertale and before reading this article.

I’m sure there are already plenty of articles and videos that cover the story elements and technical features of ‘Deltarune: Chapter 1’, and I always like to offer something different, to stand out somehow.

The puns are intended. More than you know. In Undertale we were ‘filled with determination’. Not just ‘determination’ as it is known by its foremost definition… but in EVERY definition of the word. Google the word ‘Determination’ and see for yourself. I’m beginning to understand your ways now, Toby. I’m watching you.

Will now be deconstructed.

As Undertale is about ‘determination’, among other things, I get a strong impression that Deltarune is that much about ‘predetermination’. As our choices were the subject matter and crucial in Undertale, they are ruthlessly disregarded and futile in what has been released of Deltarune so far.

“No one can choose who they are in this world.”

In the world of Deltarune, player choices do not affect the overall outcome and it’s as if Toby Fox intended Deltarune to be a game that acts as a warning as much as Undertale was a game of daring. In fact, in ‘Deltarune: Chapter 1’ you eventually have ‘Warning’ as one of your character’s action options, and Undertale is all about daring others to become more… or daring to become more yourself…

“Toby Fox has stated that the events of Deltarune are separate from Undertale, being neither a sequel nor a prequel but rather taking place in an alternate world.”

However, with so many familiar faces returning and even many consistencies (but also inconsistencies) with Undertale, I can’t help but be of the opinion that the events of ‘Deltarune: Chapter 1’ take place before Undertale in an alternate ‘timeline’…

…unless Sans somehow traversed the timelines and arrived in the one we see in ‘Deltarune: Chapter 1’. Perhaps in an attempt prevent an apocalyptic war cataclysmic event from occurring, or to fix the time-space continuum issue entirely… but then, wouldn’t there be two alternate versions of Sans in Deltarune? 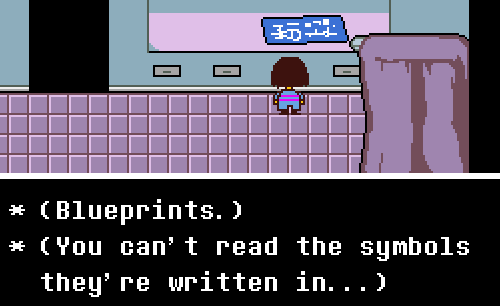 Speculation. Fox wants us to speculate. To keep second-guessing what he’s said and presented, and to keep second-guessing ourselves too. This IS cheeky and devious, but it’s not a bad thing at all. In fact, I think this is great. Why? Perhaps… we don’t speculate enough. We don’t question what is being presented to us enough. We don’t question each other enough.

Perhaps we don’t question ourselves enough…