Few gaming genres get my adrenaline pumping as much as arcade racers.  For the majority of my life, I’ve been throwing Koopa Shells in Mario Kart and evading cavalries of police officers in Need for Speed, but another racing series that I absolutely adore completing laps in is Burnout, a cult-classic arcade racing series that is known for its combination of 200+-MPH racing and over-the-top car combat.  If Burnout 3: Takedown broke ground, Burnout: Revenge demolished it, taking the merger of wreaking havoc on every one of your fellow cars (Competitor or otherwise) and zipping through the streets at heart-pounding speeds, and metaphorically injecting it with a dangerously high dose of sugar and caffeine.

Let’s start by going over the new mechanics, because Revenge has several of those, one of the biggest being something called Traffic Checking.  If you’re tired of having to dodge traffic, you’ll be pleased to know that Revenge changes that up by allowing you to ram traffic from behind and possibly cause an opponent to be taken down.  The only catch is that the car you are ramming must not be too big compared to the one you’re driving.  There’s an event type dedicated to Traffic Checking called Traffic Attack, where you must check as many cars as you can before the timer runs out.

Aside from Traffic Takedowns, there are two other new ways to wreck your opponents; To go with the addition of huge jumps, you can now land on the roof of a competitor, which is called a Vertical Takedown.  Your opponents can do the same to you however, so you have to watch your back at all times.  Remember Crashbreakers from the Crash Mode? That can now be used in races as well.  When you crash, you can detonate your car near opponents to make them crash as well, which will fill up your boost meter.  You have to use it wisely though, because using Crashbreaker depletes said meter. 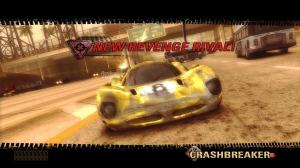 Eliminators return from the previous Burnout titles, but have been given a tweak — Instead of the last-place car being eliminated every lap, the last-place car is eliminated every 30 seconds.  This shortens the race’s length, thus giving you less time to fight through the pack and dodge every Takedown attempt that comes your way.  The other mode that Revenge changes up is the Crash Mode, doing away with the pickup items and focusing entirely on how many cars you damage.  And this time, Crashbreakers are set to be triggered when your boost meter reaches 100%, at which point you must mash the B button before the timer expires.  If you manage to mash said button to the point of fully filling said meter, your explosion reach its maximum radius.  And of course, the goal is to cause as many dollars of damage as possible.

A playground of automotive anarchy

13 tracks in the USA, Europe, and Far East make up Revenge‘s World Tour, which is a bit different compared to the one seen in Takedown.  Instead of going just for medals, you also must earn as many stars as possible, the number you earn per event varying on the tricks you pull off and what your finishing position is.  It may seem like a grind, but it gives you the urge to complete every goal, find the Signature Takedowns, and unlock every reward there is to offer.  Two things that make these new tracks different from the Burnout games of old is that they now have new huge jumps and shortcuts, allowing racers to constantly experiment with their racing lines.

Online multiplayer supports up to six players, but if you can’t access the servers, there’s always local multiplayer.  Split-screen racing supports two players at 30 frames per second, and up to five of your friends can join you for some Crash Mode madness, which makes Revenge a very nice party game.

Speaking of frames per second, I should mention that for a 2006 Xbox 360 game, the graphics are absolutely stellar.  There can be a bit of slow-mo when cars are exploding all over the place, but the sense of speed at 60 FPS will get your adrenaline pumping.

No arcade racing game would be complete without a stellar soundtrack, and Revenge delivers in spades.  EA’s fictional radio station CrashFM provides you with 41 licensed tracks, coming from well-known acts like Yellowcard, All-American Rejects, Unwritten Law, MxPx, Avenged Sevenfold, Pennywise, Fall Out Boy, Thrice, Junkie XL, Andy Hunter, Goldfinger, The Starting Line, and OK Go, as well as numerous up-and-coming artists.  I don’t really care for the electronic remixes of “Break On Through (To the Other Side)” by the Doors and “An Honest Mistake” by the Bravery, but they’ll appeal to at least someone.  If you need pulse-pounding music to help pump you up, Revenge has you covered.  Crank up your HD audio system and feel free to sing along.

Like a muscle car with a potent power plant, Burnout: Revenge was a fantastic treat out of EA’s garage, and is still an absolute jam all these years later.  If arcade racers are your cups of tea, strap into Revenge‘s cockpit and take it for a spin.  And no, I will not judge you for crashing into enemy cars while singing “Lights And Sounds” by Yellowcard, because why wouldn’t you do such a thing?