With the wild popularity of Bungie’s Destiny (2014), it comes as no surprise that Destiny 2 came out of the corner swinging. During my approximately twelve hours of vanilla game play (as the hunter class) there was never a dull moment, which is a warm welcome considering the original game and its story line flaws. The game immediately thrusts you into action as a cabal group known as The Red Legion lays siege on the main hub space, known as The Tower, and captures the Traveler in order to steal The Light (a power that the Guardians wield in order to defend their world) for themselves, you are then tossed into an adventure across multiple worlds in order to not only recover the Light but put an end to the madness that is The Red Legion.

From the stunning landscape of ruin and defeat that is the European Dead Zone to the Dangerous waters of Titan The visuals are absolutely breath taking, albeit extremely tedious to travel on foot, as this time around your trusty vehicle (Sparrow) is absent for the entire story, only unlocking once you have completed the main quest. Most of what makes Destiny….well Destiny remains such as core shooting mechanics and side quests that can be conquered on each of the games several new worlds.

Destiny 2 has a fairly forgettable soundtrack, choosing music reminiscent of the original, but that is alright due to your focus being gravitated toward what is shooting at you rather than what background music is accompanying you. Bungie nails it with an all-star cast, the likes of which include Nolan North (Uncharted Series), whom took over the role as your Ghost late in the original Destiny’s life. North adds a bit of much needed Spark and Enthusiasm when compared to the lackluster performance given by the original Ghost voice actor, Peter Dinkledge (Game of Thrones). Lance Reddick returns as Commander Zavala, who’s cinematic scenes display a mix of furiosity and determination. The Walking Dead star Lennie James lends his voice to the Crucible master, Lord Shaxx along with the talents of Bill Nighty as The Speaker, and Gideon Emery as Devrim Kay. I would be remiss if I failed to mention The Firefly and Original Destiny reunion that is Gina Torrez as Ikora Rey and Nathan Fillion as Cayde-6, the latter of which has a special humor that will leave you chomping at the bit for the next story mission in which Cayde is involved.

The Cinematics this time around, unlike its predecessor, actually give the player details on what is occurring through out your journey, which is a breath of fresh air considering the tedious method of collecting Grimore cards for information. 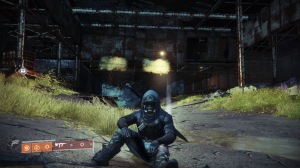 The Bounty tracker from the original returns in a new form where instead of receiving bounties from a bounty board you receive them from different NPCs on each world. Throughout my time with the game there were only a handful of instances where id be attempting to fill a bounty only to have the bounty glitch out on me and stay stuck at zero, which could possibly be caused by the massive update that the DLC Fallen brought with it and may be patched out in a future update.

The classes as well have been changed, I activated my Super expecting to expel three enemies with my Golden Gun, only to be greeted by a double ended saber that, although got the job done, took some getting used to in order to not swing blindly at nothing but air. Like to original another subclass is unlocked through a mission later in the games story.

This time around there has been a slight change in the skill tree mechanics, you receive points per level instead of having to grind your way up to a new perk.

Bungie’s second outing of the Destiny franchise is an enticing experience with a truly engaging story that comes paired along with a game play that only Bungie themselves can provide. In my game play I only ran into a handful of glitches which is good considering the size of the game. It would also have been nice to have a bit larger tutorial on how to use your new class. I cannot wait to see what Bungie has in store for the DLC.