We all know zombie games have been and continue to be a reoccurring theme in modern day culture. There’s books, television and video games that all feature our favorite and iconic apocalyptic nemeses, from the simple and mindless to the fast and furious. But, I’m not here to provide a thesis on our fascination with the living dead, or dissect what said fascination means for society (there’s plenty out there that already do). I’m here to bring wonderful news! 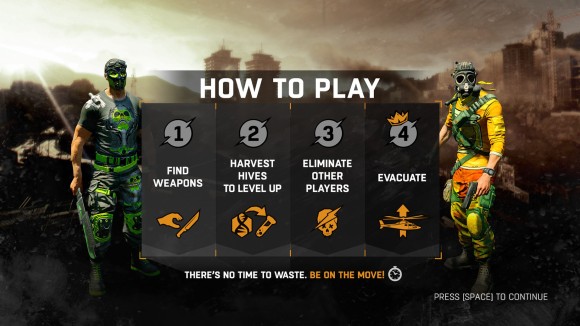 Dying Light: Bad Blood is coming, and it will be glorious. Much like the original, the game includes all the zombie types we’ve come to expect from Dying Light – and the parkour, the combat, and the atmosphere (even the map!), but with a new twist. There’s eleven other players out there with you, and none of them like you. You also hate them. Why? Because they think that the evac helicopter is for them.

But that’s a load of shit, and I’ll tell you why. Because you are the one who harvested all the blood samples, not them. You are the one, whether through brutal violence or tricks and stealth, who harvested the hives, who armed yourself to the teeth with melee weapons, and survived to tell the tale. They wont listen to reason, though, and for that, well.. you’ve still got your trusty, bleed-enhanced baseball bat.

I was able to participate in the first of two playtests, the second of which will be open to everyone who signed up on Sept 1st. It ran well, and looked great, although I had to knock it down a few pegs to get a decent 720p stream going (hardware is getting a little old). I cannot wait to get back into the game and retrieve more samples. It was fast paced, exciting and a refreshing, unique twist on the standard battle royale gameplay we’ve come to see as of late.

The rules are simple. You are spawned in on a random part of the map, landing on the soft cushions of a garbage pile, with nothing. Your goal is to acquire enough blood samples to signal the evac helicopter to come pick you up. There’s only one seat, and its for whoever gets the samples first. Find weapons, find upgrades, find gadgets (grenades, molotovs, first aide, land minds), find the hives for blood samples, level up and kill each other. For those who played the original Dying Light, you might recognize your surroundings – the game takes place in the general area around the Tower, with a few potential tweaks here and there.

Combat is typically quick and brutal – as far as the zombies go, you’re not Kyle Crane from the start of the game. Basic deadheads go down fast with appropriate strikes. You’re fast and agile. You’ve got some game in you, kid. The goons, demolishers and spitters are back and perhaps a bit stronger than before, but what’s a game without a challenge? They also added a parry ability for when you take on the other players – a well timed parry typically gives you enough of an opening for a good strike or two, which can easily mean the difference between life and death.

Overall, I was able to get in a good handful of games – in part because the servers were running rather well, and in part because matches are fast. There’s a fifteen minute timer at the start of the game, and within ten minutes someone typically has enough juice to get the chopper coming in. But not all hope is lost if you’re not the first one with the blood. Just get there before them and take it from ’em. Its yours anyway, they just did the heavy lifting.

I was even able to win a game, once. It was uplifting.

Now that I’ve said all this nice stuff, I will point out that, yes, there are loot boxes. However, they were not enabled for the playtest, only the ability to earn them. Neither was the customization, character models were randomized each game. There seems to be plenty of outfits and gear, and the weapons had skins, as well. From what the developers have said, it will be launching in early access for $20, however it will be free to play after the early access stage (and you get a few goodies for buying it early).

I can’t wait. My Saturday is cleared out for the second wave of playtests. I’m looking forward to stealing a few more hives from other players while they keep the zombies distracted. Feels good, man.