During their E3 press conference today, Ubisoft revealed more information about their toy-space game, Starlink: Battle for Atlas that’s set to release on October 16th, 2018. However, shocking news came when a new trailer appeared on screen featuring the leader of Star Fox, Fox McCloud. He will join the battle as an exclusive character for the Nintendo Switch version of the game.

According to Kotaku, “In the game, to be released October 16 for Xbox One, PlayStation 4, and Switch, you build a modular spacecraft, attach it to your controller, then take it into in-game dogfights.”

Considering how Fox hasn’t received praise from fans because of the mixed reception of Star Fox Zero–putting him in as a guest character in this space series should give this frivolous fox another chance. I was shocked when the female character in the trailer checked her scanners and received vocal messages akin to the older Star Fox lingo. It made for a dramatic and epic entrance for Fox. 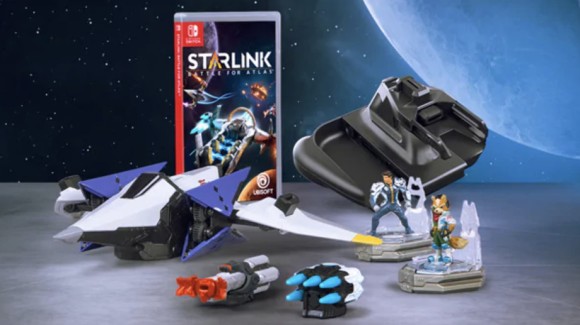 Since Nintendo Switch buyers will receive Fox as an exclusive character–it’s right for his iconic spacecraft to go along with him. The image above is called the Nintendo Switch Starter Pack–according to the Starlink website. The pack will include the following:

According to the verge, Nintendo Switch consumers will “get access to Switch-exclusive “Star Wolf” missions” alongside having the opportunity to play as Fox in the game. At this point who wouldn’t want to get the Nintendo Switch version of the game?

If you desire more information about the game, Fox’s inclusion, and other Intel on the matter, feel free to click here to gain access to Ubisoft’s website for the game. Remember the games will be available on PS4 and Xbox One, but you will not have access to Fox as a playable character.