Released into arcades worldwide in 1995 Street Fighter Alpha also known as Street Fighter Zero in Japan was the first new game in the Street Fighter Franchise to be released after Super Turbo, this is a prequel to Street fighter II in terms of the story where the characters are younger and some feature different outfits and appearances. This new iteration of Street Fighter is entirely new, introducing new features and expanding on some that were introduced in the previous entry. The Alpha series uses new cartoon styled graphics similar to the Darkstalkers and X-men Children of the Atom games that were released the previous year.

The returning Street Fighter Characters and new characters are playable with a roster of ten Characters to play and battle against from the start, the three hidden characters in this game are accessible via codes entered into the character select increasing the total number of playable characters to thirteen.

The new features and mechanics that the game introduces build onto the existing foundations laid out by the Street Fighter II sub-series of games as well as adding original content with this release, the new content is as follows. 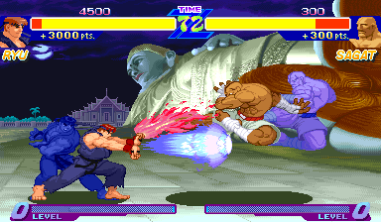 The core gameplay follows the basic mechanics of all other entries in the street fighter franchise where players fight a series of opponents in one on one battles that are the best two out of three rounds and a fourth sudden death round if there is no clear winner, with selectable speed that change the game speed with modifiable speed settings.  There are some alterations to the single player gameplay, including the introduction of a character storyline which determines the final confrontation that each character faces at the end of the game.

The single player mode consists of seven random opponents with a final storyline boss for each character, although if the player is defeated and they decide to switch their character the game will change which opponents occur in the randomised stages, altering the progress of the player and pushing them back making it impossible to get to the final boss with one character then switching to another for easier final battle. 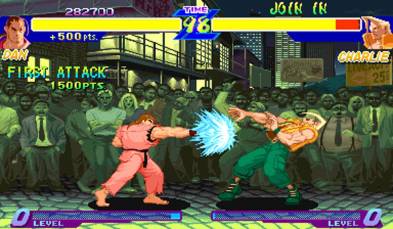 For example if a player has defeated four opponents and changes their character then the game will change the order of opponents maintaining any of those defeated while altering which opponents the player faces as the chosen character. This also prevents a player from waiting until a player reaches the boss and challenging them to a match in an attempt to steal the progress of the first player.

The multiplayer is the almost identical to every other game in the franchise but with one major change that is exclusive to the Alpha/Zero series, the secret Dramatic Battle mode where both player characters take on the boss character M. Bison in a two on one battle where they play as Ken and Ryu in a co-operative effort.

Graphically the game is a huge leap forward from the Street Fighter II series with larger sprites and more detailed animations and better quality audio, the games music takes well known themes for most of the existing characters and remixes them into something new. This breathes new life into music that may feel tired after several years of hearing it, from the iconic theme of Ken’s stage and the remix of Final Fight stage one that was chosen for Guy.

During the time I spent playing the game I enjoyed all that I experienced and I felt that the controls were fluid and smooth with little lag and no difficulty in performing combos and special techniques, the games difficulty was balanced and fair as I played several times at progressing difficulty. While playing I was unable to meet the requirements to reach the hidden boss fights, I did enjoy the challenge of each playthrough with the difficulty increasing steadily as I progressed through the single player game mode. I tried both selectable game modes and the various speeds settings, which make no difference to the overall difficulty unlike the way that speed settings did with Super Street Fighter II Turbo.

I very much enjoyed the multiplayer when playing with a friend, while playing competitively it was so much fun and trying out the new characters against returning ones and looking at how the returning characters were changed. While playing the two player mode we didn’t use move lists so the most fun was trying to figure out character attacks and how to perform the special moves, there was satisfaction when we figured out a combo or super move and that is one of the most enjoyable parts of playing the game in the arcades.

Overall as the first release in the Alpha/Zero series this is a huge leap in graphical quality from Super Street Fighter II Turbo and a good starting point for anyone who wants to play Street Fighter for the first time or introduce their friends to this game. The only downside I would see is the size of the roster is smaller than the previous games and a slightly shorter single player experience.

I give this entry 4/5 stars, it’s an excellent game overall just the smaller roster and shorter arcade mode are the only shortfalls for this release.