Continuing with our coverage of the Street Fighter franchise we are going to be looking at the first revision and its home ports Street Fighter II’ Champion edition. This version was released the following year after the original Street Fighter II. A year after Street Fighter II’ Champion Edition was released in the arcades there were three home ports using the same name released for the NEC PC-Engine, Sharp X68000 and the SEGA Genesis/Mega Drive. I have access to the PC-Engine and SEGA Genesis versions of the home version so they will be weighed up also (Sharp X68000 is a home computer in the japan region only so I am unable to play this). But first let’s take a look at the Arcade release. 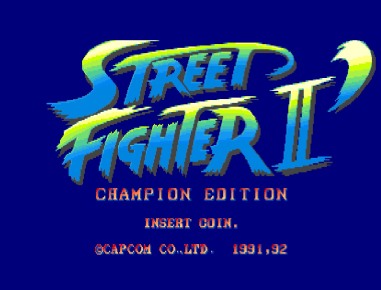 In 1992 Capcom released their first revision of the Street Fighter 2 game with the Champion Edition a new version of the game with additional features, changes and tweaks to the gameplay to make it more balanced for competitive play. These changes include:

When playing this game the differences are noticeable if you have prior experience with the original version of the game and these changes are welcomed because with them it opens up a lot more options for the players of the game. The game plays a lot better than the previous version when you add the multiplayer element with the balance changes to the characters there is a lot more fun to be had when playing against another person. The games difficulty is however slightly higher given the changes to damage and the character rebalances.

For example, some characters are given entirely new combos with the refined gameplay that deal a considerable amount of damage and some strategies that worked against the CPU no long work as well given the new gameplay. Another noticeable difficulty increase stems from the mirror match being added thus increasing the number of fights before the Boss fights, making the CPU more challenging since the game becomes harder with each advancing fight. This may get players stuck or frustrated when given a particular opponent they have difficulty against late into the game like I have with Blanka.

The core gameplay remains untouched you still have the same best two out of three round matches and the same tight controls meaning you can throw out special moves fairly easily. The new roster members of Balrog, Vega, Sagat and M. Bison are very powerful and each of them comes with their own positives and negatives when used but these balance each other out. For example if a character has a lot of speed and jump attacks they leave themselves open to anti air attacks or aerial counters, a character with a lot of projectile attacks will leave themselves open to a jump in attack when stuck in an animation. Also while you still get an ending from beating the game if you can clear it without losing a match you get a special ending with a special end credits rolling if beaten without losing a round. I have yet to achieve this playing the arcade version. 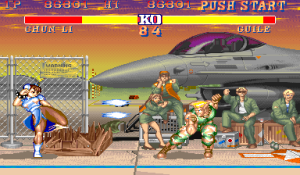 Overall the changes in the Champion Edition are welcomed and I enjoy it much more than the previous iteration in the series and the gameplay as a whole is much more enjoyable. If you can play this game then by all means pick it up.

Now let’s continue as we talk about the home ports of Champion Edition.

The PC Engine version was released exclusively in Japan on June 12, 1993. The accuracy of this port is high compared to the Super NES port of The World Warrior, as it featured the barrel-breaking bonus stage that was cut out from that version, along with numerous voice clips by the announcer and the elephants in Dhalsim’s stage. NEC Avenue released the Avenue Pad 6 specifically for the PC Engine version of Champion Edition, which added four additional action buttons.

When the game is played on a standard two-button controller, the Run button, along with buttons I and II, are used as switchable attack buttons, while the Select button is used to toggle between punches and kicks removing the ability to pause the game by using up all face buttons for this control method. This can cause great difficulty when performing combo attacks and also lead to issues with missing inputs due to the awkward button placement so it is recommended that this release of the game be played with a six button controller.

The gameplay for this is relatively unchanged from the arcade version with the only change being the omission of a bonus stage which has little impact on the overall gameplay. When playing this game with a six button controller I have little to no issues but when I tried to use the three button input system it was very awkward bordering on unplayable. Graphically the game is altered due to the PC Engine having an 8-Bit CPU with 16-Bit video capabilities, the music is also modified due to the systems limitations using music comparable to the SEGA Genesis version. The difficulty of this game feels unchanged from the arcade version with the controls and inputs feeling smooth and fluid with the only issue being slight slowdown noticeable when a strong strike hits the enemy knocking them down.

Overall this is an outstanding port of Street Fighter II: Champion Edition with great gameplay and very polished controls the only downside I would see with this release is the requirement of having to acquire a specialised controller for this version of the game. Other than that I think this is a great game and a must for any collector of the PC Engine system.

The Mega Drive/Genesis version titled Street Fighter II: Special Champion Edition was released on September 28, 1993 in Japan, September 27, 1993 in North America, and October 29, 1993 in Europe. This version was originally intended to be a standalone port of Champion Edition, similar to the PC Engine version. However, following the announcement of Street Fighter II Turbo for the SNES, Sega ordered their version to be delayed so that Capcom could add all of the extra content from the SNES Turbo version as well, resulting in the title change.

A six-button control pad for the Genesis was made primarily for the game, adding three action buttons labelled XYZ in addition to the standard ABC buttons. The game can also be played with the original three-button controller, in which the ABC buttons are used for attacks (light, medium, and heavy), while the Start button is used to toggle between punches and kicks this removes the ability to pause like the PC Engine when played with the standard two button controller. Special Champion Edition consists of a “Champ” mode with Champion Edition rules and a “Hyper” mode with Hyper Fighting rules similar to the “Normal” and “Turbo” modes in the SNES Turbo version.

This was the first console version of a Street Fighter II game to feature the original opening sequence which depicted two generic martial artists fighting in front of a cheering. The ten-star speed settings in “Hyper” mode, which were only accessible in the SNES version through a cheat code, are available by default in the Genesis version, and a cheat code that allows players to adjust the speed in “Champion” mode was added in its place. There is also a Group Battle option which appears to function in the same way as team battle featured in later fighting games.

The gameplay of champion mode is the exact same as both previous versions as mentioned before but with a change to the structure of the games bonus stages, unlike the arcade version this game has an alternate bonus stage and the order of them is switched. There is a wall bonus that takes the place of a barrel bonus stage and from champion edition and the barrel bonus takes the place of the final bonus stage (this is the same for the SNES version of the game labelled Street Fighter II Turbo). Graphical changes from the source material carry over with some compromises that were required due to hardware limits have been carried over from the World Warrior port on the SNES.

The turbo mode alters gameplay by adding additional attacks to each of the characters that open up more choices and a deeper layer of strategy to both the arcade mode and the multiplayer. Some of the additions to character move lists include the Yoga Teleport skill that allows Dhalsim to move across the screen without being attacked and Chun-Li being given a fireball attack. These additions and changes can make the game more fun but can hamper a player if they get used to one game mode but change to another. One more change is the ten speed turbo difficulty which can change the game from a simple speed increase to add a little more pace to a full insane jump around frenzy like someone gave the fighters meth. 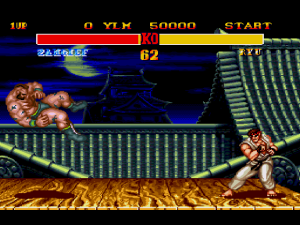 This is a solid game but it does have its downsides too the difficulty with the three button input system can hinder players without access to a six button controller, the games overall difficulty can be very punishing for players not used to the hyper mode with the speed increase. There is also the slight slowdown when a strong strike hits the opponent from various parts of the screen.

All in all the three different Versions of Street Fighter II’ Champion Edition that I played are very good games and if you are a collector of either the SEGA Genesis or PC Engine then definitely pick these games up. so with all that said using the star rating system, I give these releases a 4/5 the difficulty curve and the need to purchase a six button controller to play the game the way it was intended being the only negatives that I can see.