Authors Note:  I’m 30, if you get lost in the references it’s because I’m old and you’re not; CONGRATS.  If you chuckle to yourself while reading like I did while writing, then I’ll see you in the proverbial nursing home.

I remember my first time…

It was a cold, cloudy day in December, 1993.  I was 6 years old and fresh outta Shawshank (some may call it “school”) for the holiday break, excited and full of fervor for all the week of thrilling plans my new friends and I had come up with.  There were talks of climbing trees while exploring the snowy forest, watching movies and bingeing on Lunchable’s and Ecto-Cooler, building snow forts in the woods, and causing mischief when possible.  As the tail end of a generation that braved the outdoors without a helmet and plastic playground equipment and watched “The Sandlot” before it was considered sexist, it was shaping up to be the perfect dream break.  So after getting my parents to set up a play date with my new friend Ben, I thought my furlough was going to be one for the books, little did I know…that my life would change…FOREVER.

I was dropped off in the afternoon at Ben’s house; his dad was a German immigrant working as a computer programmer at the local IBM, they both answered the door and while the parents introduced themselves, off we went to Ben’s room and started blasting each other with Nerf guns and trying to figure out the day’s adventure.  Midway through our strategy we heard Ben’s dad yelling and laughing from his office, Ben said he’d been doing it all morning so we went to investigate.  We crept through the dining room, all the while listening, confusingly, to the odd mix of muffled sounds, aggravated grunts and soft desk punches coming from behind the office door that was slightly cracked open, and once we decided we couldn’t figure out what exactly was going on, Ben knocked.

“Hey dad, what’s all the noise?” Ben said as he peaked his head in.  What his dad said next changed my life forever.  The big man sitting at his even bigger desk, turned in his chair, careful to cover his monitor and looked at us.  He stared for a good 10 seconds, bit his lip in thought and finally said…

“Do you boys vant to see some-ting cool?”  Without hesitation we shook our heads in affirmation and his dad, almost in slow motion, revealed what his over-sized leather chair had been hiding.  There, right in front of me, I saw this… 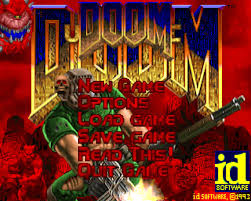 Yes, ladies and gentleman, Ben’s father was playing an early release version of the original Doom.  Two “enter button” taps later Ben and I were learning how to use the arrow keys to dodge fireballs, switching weapons via number pad, and shooting the shit out of everything in sight with CTRL.  The keyboard was all we had because his dad was cleaning the mouse earlier that week and the ball rolled away and got lost.  For the rest of that day the three of us covered the floors in pixels of red and blew through the first episode.  We laughed, we died, we clobbered everything while “Knee Deep in the Dead”!  Yes, even though we were “Too Young To Die”, we died a lot and had nothing to blame it on.  Not internet lag, not a glitch in the matrix, not clunky controls (although “clunky” would be an understatement by today’s standards), not a camper asshole posted up in a bush taking pot shots at anything that moved, but because the square ball of red fire crawled across the map and blew our space marine to GIBS.  It was confusing, it was messy, a few times it was scary and during some moments a bit embarrassing, but it was my grand entrance into the world of video games, my digital virginity had been claimed by Doom.  I went from noob to gamer in one afternoon and haven’t looked back since.

It was amazing. It was new. I was hooked.  Once Doom turned me into a real (space marine) man, I eventually mastered it and began looking for the next notch in my (Level 100 Monster Slaying) belt.  From there I sought out any and all games, anything that would run on my moms Dell.  Since we didn’t have handheld advertising devices at the time and AOL was still dial up, I would learn about all these things from friends at school, TV commercials, and magazines that I would buy from the local pharmacy with money that I was supposed to buy school lunch with (both were about two bucks at the time, but I didn’t get food poisoning from the magazines once a month).  My parents refused to buy me a Nintendo or SEGA so the Dell was my matchmaker and I fell in and out of love with games like Myst, Torin’s Passage, Duke Nukem 3D, The Incredible Machine, King’s Quest, Rise of the Triad, Mechwarrior, Hexen, and Encarta’s Mind Maze (also good for when you needed to look like you were doing research in the library at Shawshank…er, school). It was glorious, every game was a new world, every new world was a new story to wrap yourself up in.  Through the eyes of an elementary school kid who wasn’t allowed to walk too far up the street, video games were like my closet to Narnia.

From there I got older, technology advanced and I learned how to customize the hardware in my computer.  Companies like NVIDIA and Radeon drained my lunch money savings bi-yearly and I learned that RAM and CPU were acronyms and not just funny things to call components; and that a FAQ was actually an online how-to and not a play on the word “fact” (didn’t say I was a young Einstein).  I would run to my local CompUSA, EB, or Babbages (who’s main source of revenue was PC games and parts at the time) and search the shelves of cereal box sized containers of games with their brilliant cover art.  The boxes had weight because they were stuffed full of manuals and guides and trinkets, the CD’s encased in plastic, it was heaven on Earth.  I found a new friend, Matt, who shared my obsession and our weekends were full of trips to these stores and then days and days of playtime (mainly Diablo 2).  Eventually I realized that instead of buying a new GFX card or memory every couple months just to keep up, I could invest in a console and then upgrade every few years.  So I signed up to fight in the Console wars on team Microsoft (mainly because my roots we’re in the PC world), although I still had one foot entrenched in my PC gaming ways.

“My, what big boxes you have grandma..”  “All the better to load you up on content and info with, my dear”

I finagled a deal with my buddy and scored a second hand original Xbox during a turbulent time in video gaming when games like GTA3, Deus Ex, and Soldier of Fortune would grace the news nightly for their violence and awesomeness.  It was during this time that the “Video Game Violence” was the “reason” everyone was doing bad things.  Every time a story would come on the news, I would laugh, tell my mom that I owned every one of those games and haven’t wanted to hurt anyone.  To which she would shrug and say “I raised a couple of good kids, I don’t need to blame things if you guys do something wrong, I’ll just smack you and correct it.” (I was a lucky one).

And so things went.  I gamed, I dated, and did stupid things because: reasons, lived life like a normal kid and enjoyed it while I could.  Eventually I went to college, gingerly packing my Xbox and all its games, knowing it would get me through many a late night; and it did.  I upgraded through the years to the 360, then the One, broadening my knowledge of everything virtual. Here I sit today, writing for a great up and coming video game website (HI SILVER!!), almost 31, and still loving and playing games.  PC adventures still occasionally enter my life, although I never stopped devouring any and all gaming news for all platforms, even Playstation (eeewwww), but Xbox is where I call home still (with a pretty impressive or sad gamerscore, depending on how you look at it).

Hopefully this trip through memory land didn’t leave you too confused, the amount of ground covered in gaming in the past 20 years has been astounding, and it’s still going strong.  With virtual reality literally knocking on the door, we are in for a world of wonder when it comes to what we will be able to do soon, which makes watching shows like Black Mirror all the more scary.  Not to mention we are pretty much halfway or all the way at the point of technology in some of those episodes.

So that’s my story.  From the first murderous time to where it lead me today, and I can’t say I can complain.  I’ve grown to accept all games and systems and gamers (except “mobile gamers”….I hate anyone who plays Candy Crush and denotes upon themselves the title “gamer”.  Just because I know about England, doesn’t make me the goddamn Queen, ya dig?).  Even though I prefer my Xbox, it’s good to know what else is going on out there because you never know what will intrigue you or change your brand loyalty, and as a gamer you come first, and that is yet another reason games appeal to people, it’s your story on your terms.  Which makes me think that was the reason Doom captivated me all those years ago.  Once acclimated to the controls we adventured where we wanted how we wanted.  Finding secrets, rushing through a level or taking our time exploring, it really was on our terms, and it was so much fun; and that’s the one thing that games have unequivocally offered from that day until now: FREEDOM!