“POWER SPIKES II is a sports game released in 1994 by VIDEO SYSTEM.
It features the Hyper Mode where the world’s strongest 8 teams compete along with the World Men’s and World Women’s teams in this futuristic fighting volleyball.
In Hyper Mode, commands for special serves and spikes can be input for an intense battle.”

Press release taken from the official Hamster site at, http://hamster.co.jp/american_hamster/arcadearchives/switch/ps2.htm

The game power spikes 2 is a simple volleyball game by Video System for the NeoGeo arcade MVS system and the home AES system released in 1994. It has made the jump to the Nintendo Switch thanks to Hamster Corp released on January 18th 2018. The port has the following game modes available to players.

Japanese Version, Original Mode – the arcade version of the game in its original form using the Japanese language.

English Version, Original Mode – the translated version of the Japanese version of the game for English speaking users. (There is a language option for Portuguese and Spanish users within the settings)

Hi-score mode – a single player version of the English arcade version where the player has a single credit to try and beat their own high score and others on the online rankings leaderboard.

Caravan mode – a single player time trial where the player has five minutes to get as high a score as possible which is then added to the online rankings leaderboard. 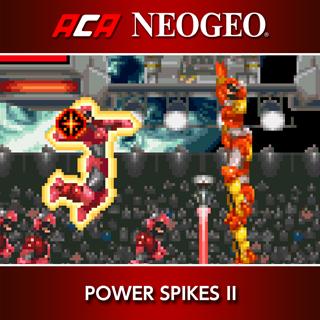 The game Power Spikes 2 comes with three game modes in it. The HYPER LEAGUE, WORLD MEN and WORLD WOMEN. The modes have differences to each other and we are going to break these down.

HYPER LEAGUE – Futuristic deathmatch style volleyball battle using robot suits, special moves and power bars that can make the game fast paced and fun, With eight outlandishly named and designed teams to pick from. Instead of the traditional point based volleyball used in the other modes the HYPER LEAGUE uses health bars that are reduced with each lost volley. The health goes down with varying degrees depending on the power of the spike used to score with. 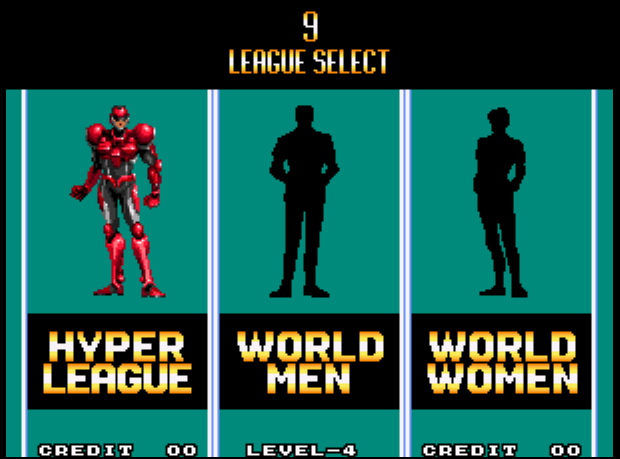 The game has very simplified controls that utilise a single button for serving, receiving, volleys and spiking. But these simplified controls make it awkward to time volleys serves and spikes when learning to play the game. There are issues with the movement controls, these issues are precision that cause losses of points when first picking up the game.  The jumping for spikes and return serves are automatic causing timing problems when learning these game mechanics.

The HYPER LEAGUE mode has additional controls that cause more issues when the first starting to play the game. The game mode features additional movement inputs to perform special moves similar to a fighting game. The mechanics introduced to a player in this mode can cause difficulty for the people who have purchased this game expecting to simply pick it up and play.

The two WORLD game modes also have issues that are caused by the automated actions meaning that spikes and returns can be missed. These problems are going to affect the players who want to pick it up and play it without any issues.

The games difficulty when starting a game at the lower levels is balanced and reasonable slowly increasing to make the game more challenging. However when the game is played at higher difficulties the challenge goes from hard to unfair with the AI having perfect accuracy and timing for almost every serve and return. If enough time is spent then the game can easily be mastered but if you are looking for a casual fun game then stick to the lower levels once used to the games mechanics.

Overall I would say that the game has its positives but for me there are more negatives leading me to decide that if you want a fun volleyball game avoid this title. There was more frustration for me than enjoyment in the first hour of play and there was no improvement when I had learned how to time my actions after three plus hours of gameplay.

I give this game 5/10 the premise and overall game is appealing but the issues I had with the gameplay and mechanics soured my expectations of a fun game.