If you played the original Life is Strange game, then all you need to know for a review of Before the Storm if you’re thinking about buying it is: *in the tone of Arnold Schwarzenegger* WHAT THE HELL IS WRONG WITH YOU, PLAY IT ALREADY!  STOP WHAT YOU’RE DOING AND BUY THE DAMN GAME! GET TO THE CHOPPA! BLARGHAGALGLAGAH!?

Seriously people, this game is so great I need to scream about it in Schwarzenegger!  In order for you to fully appreciate it, below is a quick synopsis of the first game:

[MINOR SPOILERS FOR THE ORIGINAL LIFE IS STRANGE BELOW]

In the original Life is Strange you play as Max Caulfield, the budding photographer who moves back to her hometown of Arcadia Bay and discovers her innate ability to control time as well as trying to make sense of a life she left behind.  Now I don’t know about you, but I’ve never been a teenage girl and can only control time twice a year when daylight savings decides to disrupt everyone sleep cycle for a few weeks; yet I felt so compelled by the characters and story in this game I think I may have come as close to understanding as humanly possible.

This is Max kickin’ ass and takin’ pics…

Just to briefly annotate the events of the first foray into Arcadia Bay (and in no way does this description do the game any justice whatsoever): Max and her family move back home to Arcadia Bay.  Max reunites with her childhood best friend Chloe at the Blackwell Academy where Chloe has been suspended for reasons unknown.  Chloe is also frantically looking for her friend Rachel Amber for more reasons unknown, and there is also a serial killer running around town serial killing…for yet some even more reasons unknown.  During all this Max figures out how to reverse time and change the course of history on a whim and their entire world starts going ape shit and it’s amazing, thought provoking, sad, happy, funny, scary…basically how I remember seeing the world when I was a teenager, minus the murdering and magic.  Throughout the tale you learn all about the main characters and their pasts together while hunting a mystery killer, which truly is a journey and the writers did an astounding job.  However, other than the serial killer mystery and Max and Chloe’s past being unraveled, a lot of backstory is left open and a lot of questions begged answering, such as: What was the deal with Chloe and Rachel?  What did Chloe do to get expelled?  Why is Nathan such a Mr. Creepy Pants?  Was Principal Wells head always firmly affixed to the inside of his rectum?  All these questions and more just kind of hung in the air as the credits (and tears…manly ass tears) rolled after the final scene, and I really wanted to fill in the blanks so much I played it again to see what I missed, but the open ends were still open after the second, even third play-through with different choices! I needed to know more and was at a loss, until about two years later; enter Before the Storm… 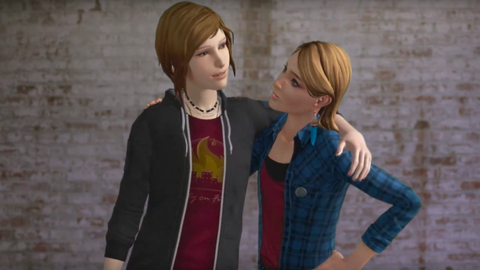 Friends till the end…

For all intents and purposes this prequel could have been called Life is Strange: Q&A in terms of answering the things left hanging from the first game; but it did that and so, so, soooo much more.  Beyond answering all the questions, Dotnod once again blew me away with a story so engrossing that there were times when it legit felt like I was inside the head Chloe and, often, I felt as confused as she did. Except where I had the luxury of being able to sit on a choice for a few minutes and ponder, Chloe’s choice was an instantaneous, life altering decision.  Even with that break in time for you to make a decision, the weight of it is felt as heavily as you would think Chloe was feeling it in that instant, but that’s the same magical writing that made me fall in love with the original. In order to write this without spoilers I will be as vague about story elements as possible.

[MINOR SPOILERS FOR LIFE IS STRANGE – BEFORE THE STORM]

The game opens up in a familiar locale with Chloe, our budding graffiti artist, en route to see a local band in an abandoned mill.  After a brief intro you quickly learn all the similarities and differences in game play from the original as you are faced with your first situational puzzle.  For one, instead of taking optional photos, you need to find places optional places to tag with your faithful big black marker.  One of my favorite things about this variation is that every time you find a spot to tag, you get to pick from 2 different graffiti options, from quotes to pictures, and they stayed through the future episodes. The biggest difference is the lack of rewind ability, and that doesn’t effect the game one iota.  It was after playing through the first episode that I realized that the missing rewind mechanic didn’t take away from the game at all because the world and characters themselves are the draw when it comes to LIS.  Although the rewind ability was bad-ass, it really had little to no effect on how much I fell in love and re-fell in love with the characters in the series.

Chloe rockin’ one of the many outfits in the game…

A minor difference was the addition of the ability to pick outfits.  This really wasn’t a huge wow moment for me but it was a cool addition, and my girlfriend was thrilled since we play these games together, promising not to go any further without the other present (which was damn hard).  Even though it wasn’t huge for me I can’t discredit the addition and the outfits only added to the depth of the game.  The last difference that jumped out at me is the choice system.  The team really put some work into the different choices and endings you could have.  This is so much so that at the time I finished the third chapter and reviewed my choices, there were still 0% next to some options (and there were more choice trees than in LIS), which translates to the fact that of all the people in the world playing this game, certain endings, scenes and actions were still yet to be seen.  I’m waiting for the bonus chapter to come out before playing the game again to see what other things there are to discover.

The story itself is a harrowing one, even without the serial killer aspect.  The path that Chloe and Rachel find themselves on is unique to any game that I can recall.  Never have I begun to think about the struggles of a teenage girl discovering herself in a world that really isn’t fair, and the fact that the characters parents don’t shield them from the world and are more focused on discipline (or lack thereof) and protecting their children no matter the cost, lends to the interest in the game experience.  The voice acting and visual direction of the game is on par with today’s best and most engrossing films and the music is utterly haunting and perfectly composed.  In fact I would even go as far as to say that the music could stand on its own as a character since it pulls you into scenes as much as wanting to know the rest whats going on in Arcadia Bay.  If there was ever a perfect storm of a game, LIS: BTS is it.  Rarely can a sequel (or prequel) land with the ferocity of it’s previous and hit just as hard, if not harder, especially when one of it’s predecessors key components was totally absent. Which brings me to my only complaint of the game. 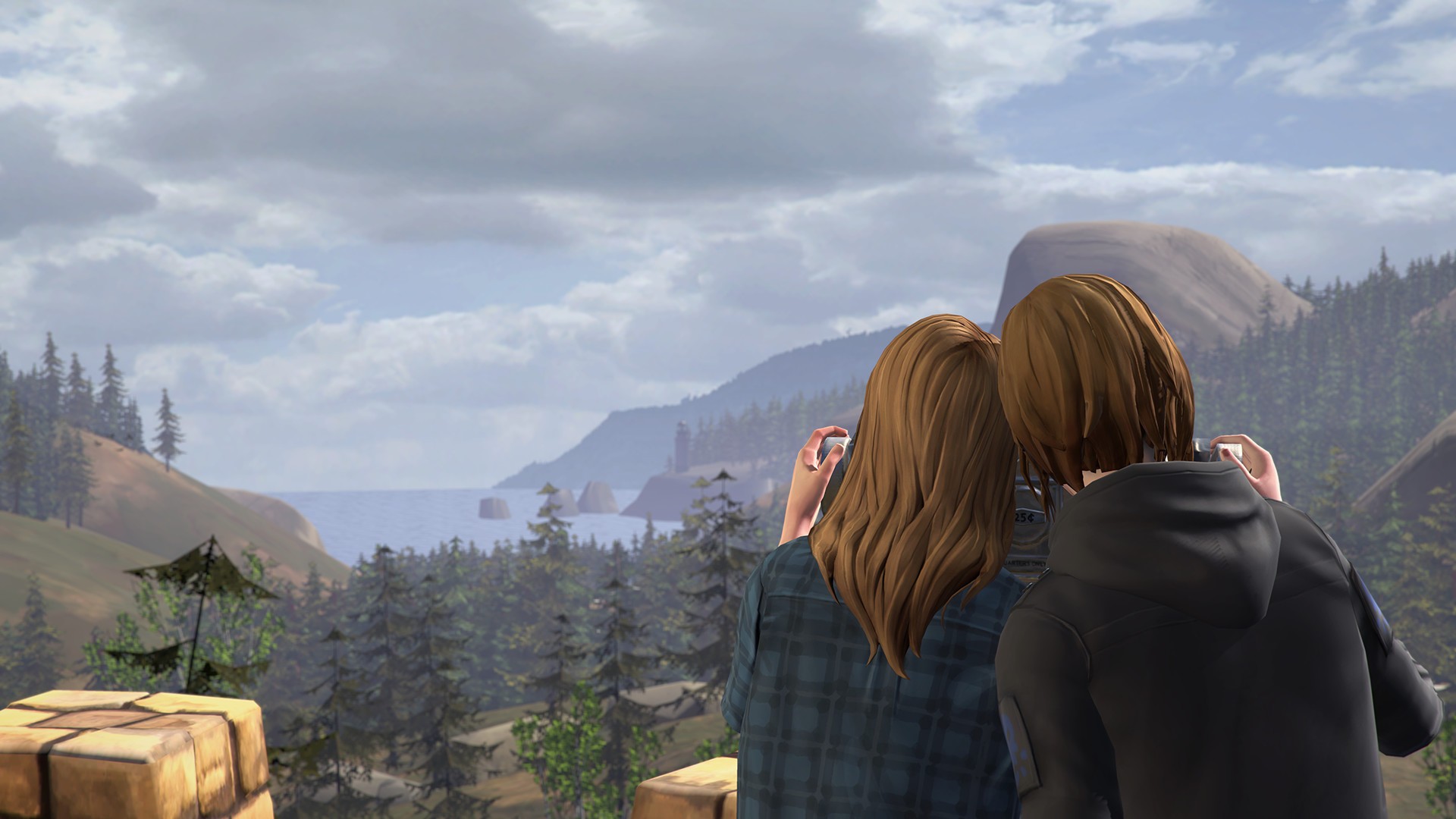 “We see past time in a telescope and present time in a microscope. Hence the apparent enormities of the present.” – Victor Hugo

Here it is, my only con: It was shorter than the first one.  Even including the addition of the soon to be released bonus episode, the game is a whole episode short.  This isn’t really a complaint as much as it is an observation I suppose, since I would love to play new episodes endlessly, but I’m glad the team didn’t sacrifice quality for quantity.  Instead of dragging out the game over an extra episode, the Dotnod team focused on a meaningful plot line and did it the best way possible.  The broad range of subjects that were explored in the short time you played the game is as impressive as everything else in the series.

They address topics such as sexuality, bullying, friendship, infidelity, violence, drugs, humor (both light and dark), stealing, divorce, death, loss, privacy, hard goodbyes, new beginnings, and love.  All these are more or less MAIN themes in the game, and a lot of them are dark but real issues faced every day; and experiencing these through the eyes of a teen learning about the world only served to make it more dramatic.  Perhaps the paramount reason that the game works all these topics so well into such an epic story is because they attack these themes in a way that doesn’t treat you like an idiot.  In no way does this game ever feel like it’s condescending to the gamer, or preachy, or over the top , or politically correct ad nauseam as is the case in almost everything these days.  They treated these issues and these characters as normal people facing abnormal circumstances and produced a story that was so believable, heartwarming, heart-wrenching and brutally honest that I wouldn’t be surprised if they announced that the game was based on a true story (hopefully it isn’t, that would be shitty for some people).  Writing this well in any medium is hard to come by, and the team behind the Life is Strange series has some of, if not THE, best writers out there today.  Now all that’s left for me to do is patiently wait for the bonus episode to come out sometime in February, and pray to the gods of gaming that Dotnod is working on their next (in the words of Chloe) amazeballs story (or more from Max, Chloe, and Rachel).