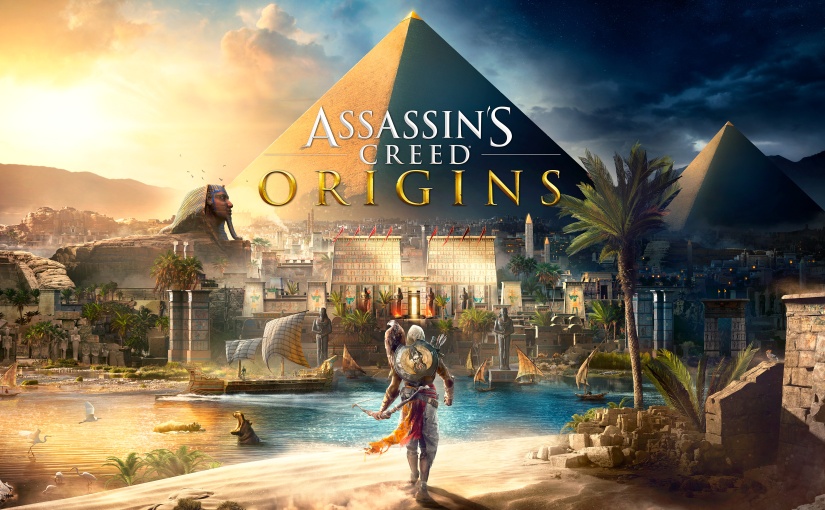 When it comes to sequels in gaming, there are three obvious ways they can go.  First off they can flat out suck. Thankfully in gaming, sequels rarely are so God awful that they kill an entire franchise; even Duke Nukem Forever couldn’t ruin all the nostalgic memories of blowing warthogs to a million pixels with my dual rocket launchers.  The second and most common way is for them to be carbon copies of the last. As is the current trend with the Call of Duty series, and was the trend with the AC series since Ezio was cruising around in Leonardo da Vinci’s “Flying Machine”.  The third and best way to go is for a sequel to breathe new life into a series to the point where it’s familiar enough to make sense, but new enough to stand on it’s own; and that brings us to *drumroll* Origins.

Assassin’s Creed Origins is the best and most innovative Assassin’s game since AC2 (arguably AC: Black Flag was decently innovative with the intro of water battles and mechanics, but Origins…it’s soooo damn good; just play it or read on, you’ll see).

I am a lifelong fan of the series, having played all the core games since they first debuted 10 or so years ago.  As a lifelong fan of the series, I acknowledged its shortcomings with each new game, but devoured every title anyway.  Unlike the above mentioned Call of Duty, what kept me involved with AC was the lore, the ability to walk through extremely detailed, historically accurate cities from the past, the ongoing saga of Desmond Miles and friends and beyond, and, of course, being A BAD ASS MO’EFFIN ASSASSIN, SON!  I found the repetitiveness, well, pretty repetitive but it didn’t take away from everything else since they weren’t tied to the story.  Graphics improved slightly or stayed the same with each title (at least until recently) and the collectibles became overwhelming at times.  But when you’re pumping out a game a year, it’s got to be hard to reinvent the wheel every time.  Well, with the extra year of development put into Origins, Ubisoft not only reinvented the wheel, they also slapped a twin turbo engine and wings on it! There are so many little details that just bring an immense smile to my face as well as massive ones; Origins has by and far surpassed all the other games in the series in every way.

Graphically, the game is B-E-A-UTIFUL.  I’m not one to complain or lower a score if a games frame rate occasionally sputters, if my protagonists hand clips through a wall, or if the textures take a few seconds to load, yet thankfully all of those we’re issues that almost never occurred.  In the 90 hours (and counting) I have put into Origins, I can recall two maybe three instances of frame rate issues, textures and draw distances were almost always perfect, and even if there was clipping I didn’t notice it.  What I did notice: Grass and whey blowing in the wind, each individual strand seemed to move independently (and if you walk slowly through them you’ll notice a pretty spot on Gladiator reference), the Great Pyramids of Giza built to scale and glistening in the sun from half way across the map, spiderwebs igniting in flames and burning away as you pass under them with your torch, sunken cities and shipwrecks that glow in the sunlight or moonlight from their depths, a night sky so vibrant that I wanted to mount my TV to the ceiling over my bed and pretend I was camping.  The graphics were sharp, clean, and gorgeous.  The only complaint, and it is a minor one, is with the character models during in-game conversations.  It’s nothing crazy, but the scripted interactions between Bayek, Aya and other NPC’s was reminiscent of character interactions in the Sims.  They would rigidly stand and wave their arms around with stoic faces and the lip syncing on par with the 1954 Godzilla’s dubbing. Again, this was only really noticeable during the in-game cut scenes and it wasn’t at all detrimental to the game or story. Also, I wasn’t playing on the One X with 4K everything, so maybe that accounts for some of it.

The biggest plus, and most noticeable difference, in Origins is the collectible system.  Gone are the days where you have 10 chests in 10 square feet to find, all at different levels of the world (oh, let’s put this one on the roof, this one on the porch, and this one in an alcove below…then do it again a block away) or a couple hundred feathers to jump off a roof and miss by an inch even though you swore you grabbed the damn thing.  Now, collectibles come in the form of locations; sure the chest’s are still there, but appropriately placed as opposed to crammed in like they were trying to set a world record.  The locations are either small battles with humans or animals, some type of puzzle, or exploratory/investigative.  Aside from adding a depth to the game that wasn’t there before, it’s also A LOT less daunting and it creates a desire to see them all, never knowing what you’ll find, and if you don’t find that desire, they aren’t required to complete the story.  The game is big enough that you could probably sink 40 hours in with just main and side quests and not even attempt the extra locations (but why the hell would you do that?!)  There’s also the fact, that as beautiful as this game is, it’s also the “flattest” in terms of architecture to climb, and that is in NO way a bad thing.  I was quite surprised at how little I used fast travel, opting to cruise around the deserts and mountains on my trusty camel or horse (or chocobo for those in the know…), watching the varied hallucinations dance across my screen.  Which brings me to my next point…

It’s the little things in this game that really made it amazing to me.  For example, when you are sprinting through the desert terrain and decide you need your trusty steed you can call him and, mid sprint, jump on without a moments hesitation or slowing down.  Read that sentence again slowly and really think about how great a mechanic that is.  I can’t recall a game where this was ever a thing; usually you need to stop, then there is some animation and then you resume your journey.  Or it’s a choppy slow transition that causes you to slow up anyway, but not in Origins.  Now, you can run, run, run, mount horse mid step, then go faster than you were before without skipping a beat or recalibrating your direction.  Call me petty but this was probably my favorite mechanic in the game.  Then there is the new fight system that removes the old timed button mashing and replaces it with a sleek new “smash the shit out of everything” mechanic (that’s the industry term for it in…my head).  Now you have more control over your assassin as he dispatches the never ending droves of guards, lions, hyenas, and leopards (OH, MY!)  It took some getting used to (as does anything new) and garnered some grief from gamers, but it honestly made the game more enjoyable and less frustrating.  So I had to learn something new, but the game really was all the better for it. Of course there were the kinks, specifically when switching targets during a large battle or hacking away at a wall when I was trying to bring sweet death to a pesky guard, but the pro’s outweigh the cons by far, once I learned the controls these things rarely happened, the change is totally worth it and welcome.  This also helped with the pacing of fights, they didn’t seem to go on forever as they used to when you could literally watch the baddies line up to wait their turn to eat blade; and it helped illustrate the themes of urgency in the story (sorry for my English major interjection).

The story itself is great, although nothing really new in terms of a textbook tragedy.  The writers did a great job laying out the fateful story of Bayek and Aya and pulled me in completely, it just wasn’t anything too far off the beaten path in terms of drama, although it did get rather dark at times.  As an occasional writer of fiction I know it can be hard, and going back through a decade of games to make an origin story while still maintaining a concise timeline probably wasn’t the easiest, and the writers did a great job.  I might be more oblivious than others but I really can’t recall finding any plot holes (they even linked games outside the franchise) and the side missions add to the canon as much as the main quests.  If I were a creative writing teacher, the team behind origins would get an A+ and a gold star (also the generic participation trophy because every game is “special” in it’s own way).  To put it simply, the game is so good that when I bought it, I didn’t even bother to look at the season pass as I still haven’t gotten into Syndicate’s DLC, but after playing I bought the hell out of it.  Also, I’m still running around in the game having 100%ed it just taking in the sites (cant wait for Discovery Tour, I wish school was this exciting). 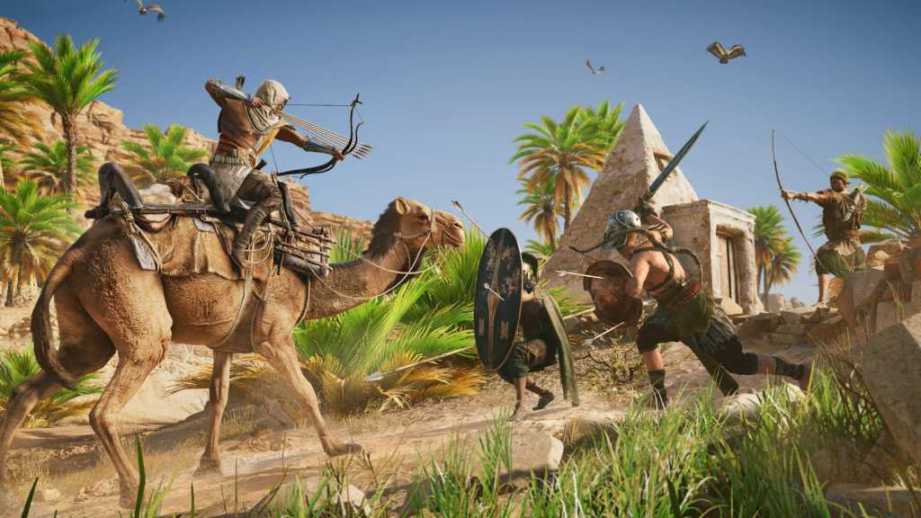 All in all Assassin’s Creed: Origins is the bee knees, the cat’s meow, and [insert 50’s phrase for cool here].  Ubisoft kicked in the door to the Brotherhood, burned away all the cobwebs with their torch, and breathed new life into a stagnating (although still fun) franchise.  I am currently looking forward to devouring the DLC and will have no problem waiting the extra time for Ubisoft to release as high a quality game as Origins is, even if it takes longer than a year.  Rockstar can do it and so can you, Ubisoft!  On that note, go pick up a copy of the game and kill some historical figures to start off the new year.  As for me, I’m off to Cyrene to cave in some gladiator heads and patiently wait for “The Hidden Ones” DLC to grace my dashboard.