As a gamer always looking for the perfect controller to combat arthritic and fibromyalgia pain, I was very excited to hear about Evil Controllers. Based out of Tempe, AZ, Evil makes custom and modified controllers for both the casual and hardcore gamer, the competitor, and even the gamer that cannot hold a regular controller due to disability. I had the incredible honor recently of going to visit Evil Controllers and get a tour of their operations from the CEO himself, Adam Coe.

I was able to speak with Adam over the phone while he was in France for Paris Games, and ask him a handful of questions about his business, products, and inspirations. I quickly learned that he is an endearing man with a lot of passion, which only increased my interest in Evil Controllers.

Evil Controllers CEO Adam Coe, after being nominated for Best of E3 2017 for the Evil Shift controller.

The company began in 2007 after Adam and his brother, Jonah, saw that there really wasn’t anybody modifying controllers. Customization just wasn’t a thing yet. They relocated two buttons on Xbox 360 controllers to use for Halo 2, and ended up selling some of them on eBay. It was then that someone from the United Kingdom reached out to them about a controller that could be held and used one-handed. By simply moving buttons, disabling one side of the controller internally, and adding a more accessible joystick, they succeeded. After multiple designs and button changes, the lefty and righty one-handed controllers are one of their bestsellers.

I was able to mess around with some one-handed controllers and it is easy to understand how they work once you hold one. This Xbox One controller has two additional joysticks added to the left side for use with an arm, hand, or even knee, while the right side remains intact and functions as usual. 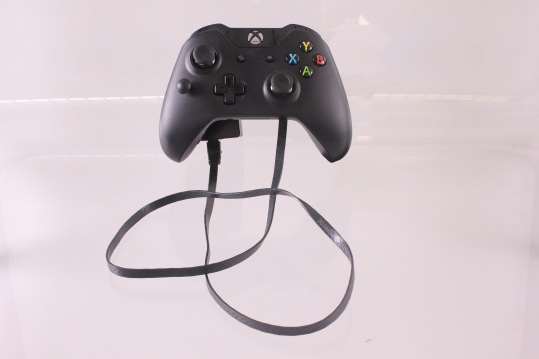 After their work began with disability gaming, Adam attended an accessibility event and met with Able Gamers Charity, who helped him to see the void in the gaming industry that had been left by the inability for some to use a regular controller. It is something many do not consider because when we think of gamers we think of individuals that can easily use both hands, when in reality a lot of people use video games as an escape. I myself use gaming as a coping mechanism and pain management method. Adam wanted to help everyone use that escape.

With the aid of Able Gamers, Evil Controllers began to experiment with different designs and functions, based on the needs of those who reached out to them. Aside from the one-handed controllers, Adam told me that their most frequent requests are controllers for those with muscular dystrophy and cerebral palsy, two disabilities that cause difficulty with movement and motor skill failure. Incredibly, they have mastered not only the ability to relocate anything on a controller, but also the ability to build fully custom controllers that can be used with small movements of the hands, head, or even tongue.

Thanks to Evil Controllers, this young man with muscular dystrophy is able to play his Xbox 360 with both his mouth and by moving his head.

This “primitive” model, built for the young man above, has multiple uses. The controllers are changed by switching the wires from the Xbox controller to either the headrest or face controls. The large red button is capable of acting as whatever he wants, and was one of his favorite pieces because it was easy to touch.

Using an arcade-style controller, this was built for a man with cerebral palsy. The balloon is covering the piece for his mouth to keep it clean, but with all of the buttons as well as the mouth, this controller had multiple functions.

One of Adam’s proudest pieces was an Xbox 360 controller, split in half but fully functional, for an individual that could not bring their hands close enough together to play with a normal controller. “It was so cool, I was able to play a game with my left hand in my lap, and my right hand behind my head. It was really comfortable,” Adam laughed during our meeting in Tempe. I stated how that is a big draw that people have to the Nintendo Switch, and told him that I was impressed they were able to do such a thing while keeping the circuit board fully functional as if it were still one solid controller.

“Whatever the disability is, it is absolutely possible to make a controller.” – CEO Adam Coe

Sorry, Nintendo, but Evil Controllers did it long before the Joy-Cons were released.

As the company made more accessible controllers, they were able to refine their designs and make them not only look nicer, but function beautifully. 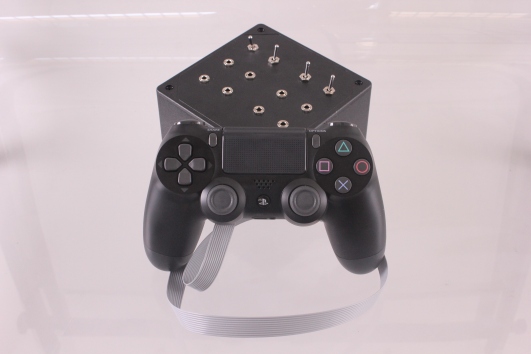 A PlayStation 4 controller that is fully remappable, or even capable of connecting to other controllers like the young man’s motorized wheelchair, using a simple plug and switch box.

A stylish new version of the arcade-style controller. Shiny carbon fiber top, with added buttons, and the ability to switch from the two joysticks or the rolling balls that are in the surface of the controller. 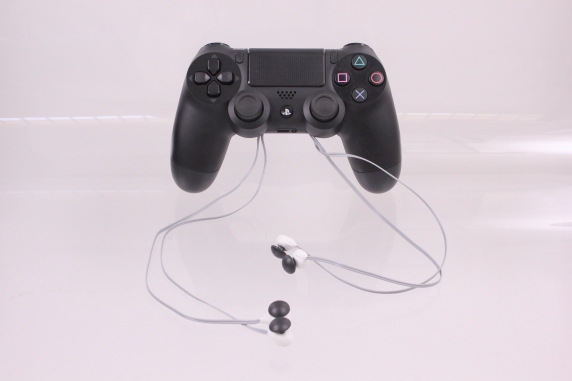 A PlayStation 4 controller with separate buttons.

One of the main focuses of Able Gamers is to help disabled gamers get controllers that are custom built for them. It is in fact Evil Controllers that builds and provides these, so of course they are partnered with the charity. They also gain clients through UK’s Special Effect, and from recommendations that Microsoft makes to gamers that contact them about accessible controllers. As of right now, they are building 50-100 accessible controllers per year, but hope to increase production in the near future.

While Adam and his team were making custom painted controllers for regular gamers, their work with accessible controllers inspired them to move buttons to the back of the controllers. Think of the way an Xbox One Elite, or a SCUF controller has paddles on the back. Instead of floating paddles, they decided to go with buttons. The original design were small, hard to notice black buttons that sat flush against the grips right under the player’s fingers, like the black circles underneath the red buttons in the photo below. They were sleek, but not easy to use, so they switched to these larger styles. This was intended for any type of gamer, including competitors.

A previous controller design with buttons on the back grips.

After years of trying new styles, and producing their own patents, they have recently released the Evil Shift controller for PlayStation 4 and Xbox One, and it is certainly something to be proud of.

The Xbox One Evil Shift in stock black.

Built for the competition gamer, the casual, or the hardcore, and of course customizable for accessibility for disabled gamers, the Evil Shift is one hell of a controller. I had the opportunity to check it out for both the Xbox One and PS4, and I was insanely impressed. I currently use a Microsoft Elite for my Xbox, and a SCUF Infinity Pro for my PlayStation, and I still deal with hand pain because the paddles and buttons are too spaced apart. Especially the PlayStation controller; I can hardly use the stock controller at all anymore. The Shift is so much more elegant in its styling for the buttons on the back.

The mappable buttons on the back of the Evil Shift.

Evil’s logos on the buttons.

Using their patented buttons to replace paddles, the controller is more comfortable in your hands because they do not stick out like paddles, and there is nothing for your finger to get caught under. I cannot tell you how often I go to reload a firearm in an online match and my finger just pulls the Elite’s magnetic paddle right out of the controller. Aside from the use of stylish buttons, what makes the Shift unique- and gives it its name- is the fact that the buttons move. They are stationary, but if you press one from the edge or while simultaneously pressing the button beside it, the button will gently “shift” with the movement of your fingers. The patented button movement is so flawless and comfortable that I was using them with only one finger on each side. Adam informed me that one of the employees at Evil Controllers utilizes all ten of her fingers with her Shift!

I got to check out the Shift for both consoles, and it was the first time I have said that a PlayStation 4 controller was comfortable in my hands. I was incredibly impressed. One of the best aspects of the Shift is that it is entirely mappable with no tools or apps, unlike the Elite and SCUF controllers. The simple fact that it requires absolutely no extra parts is welcome, because it is tough enough keeping charging cables out of the mouth of a puppy or from getting lost around the house, let alone a tiny magnet or other tool. And of course the thumb sticks are interchangeable, with different shapes and lengths, but still do not require a tool of any kind. Oh, and the thumb sticks have the logo on them, and it is quite adorable.

While the Evil Controller Master Mod controllers are available with many options, they are not legal for competition gaming. Not only is the Shift impressive, it also falls under regulation for any and all eSports events. This is made obvious by the Evil ‘e’ on the power button. If any controller, including a Shift, has Master Mods implemented, the controller bears the stock Xbox or PlayStation symbol, like a regular controller. This helps differentiate between certain customizations, and makes it easier for a competitive gamer to grab the proper controller before heading out to an event. 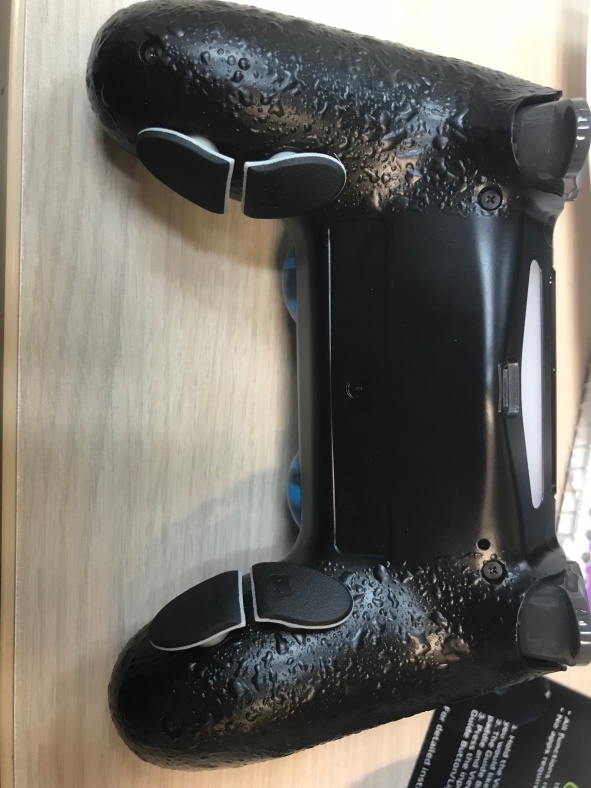 The back of a PlayStation Evil Shift, with its impressively comfortable mappable buttons.

With many options like sensitive buttons and hair triggers, different colors, even customization such as adding your gamertag to your controller, anything you have made by Evil Controllers will be incredible. Each one is made by hand- the circuit boards are rewired, the faceplates are painted and designed on site, and there are tons of colors in every part imaginable to choose from. From simply entering the studio in which they are built, you can feel the love and passion that goes into each individual controller. That alone makes Evil the go-to for your next, or even first, custom controller.

I will be getting an Evil Shift for each system to compare to my SCUF and Elite hands on, so follow us on Facebook and Twitter for a comparative review and photos of the controllers!

If you would like to order your own, or check out Evil Controllers for the holidays, go to EvilControllers.com

I love the elite controller with the buttons on the back instead of paddles. I really want to test drive that.

Being a disabled gamer myself, I respect what these guys do.